Danex is a well researched product containing rare and highly medicinal plants like Tylophora asthmatica (Dumvel-special for asthma and allergic cough), long pepper (for fever and cough), liquorice  (for cough) etc  extracted and formulated scientifically.
Asthma is a disorder caused by inflammation in the airways (called bronchi) that leads to the lungs. This inflammation causes muscles lining the swollen airways (trachea, bronchiii, bronchiole  and other smaller airways)  to tighten and constrict, making them even more narrowed and blocked. Reduced lumen of the airways results in a reduction in the amount of air going into lungs, making it hard to breathe. In addition  excess mucus that is formed results in congestion and mucus “plugs” that get caught in the narrowed airways.

Symptoms of asthma include wheezing (a whistling sound during breathing), breathlessness, chest tightness, and cough, particularly at night or after exercise/activity. The inflammation may be completely or partially reversed with or without medicines. Asthma can be due to viral infection, allergens, cold air, exposure to smoke and exercise. Things that trigger asthma differ from person to person. Some common triggers are exercise, allergies, viral infections, and smoke. Symptoms are usually worse at night and in the early morning or in response to exercise or cold air

Treatment of asthma  is usually with an inhaled short-acting beta-2 agonist (such as salbutamol) and oral corticosteroids. In very severe cases, intravenous corticosteroids, magnesium sulfate, and hospitalization may be required.  Symptoms can be prevented by avoiding triggers, such as allergens  and irritants, and by the use of inhaled corticosteroids. Long-acting beta agonists (LABA) or leukotriene antagonists may be used in addition to inhaled corticosteroids if asthma symptoms remain uncontrolled. The occurrence of asthma has increased significantly since the 1970s. In 2011, 235–300 million people globally have been diagnosed with asthma, and it caused 250,000 deaths. 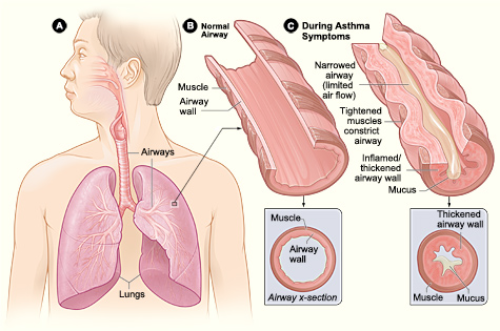 Figure A shows the location of the lungs and airways in the body.

Figure B shows a cross-section of a normal airway.

Figure C shows a cross-section of an airway during asthma symptoms.

The plants used in Danex
Anantamul, Dumvel  (Tylophora indica Merrill. Syn. T. asthmatica)
A native of India and Malaya, this is a twinning perennial with long fleshy roots and small ovate leaves. The greenish purple flowers are borne on short umbellate cymes. The pair of follicles contains broadly ovate, comose seeds. The plant has been reported to contain 0.2- 0.46% alkaloids. The active constituents of Tylophora indica are phenanthroindolizidine alkaloids like tylophorine, tylophorinine, tylophorinidine and septidine and other alkaloids asuch as  tyloindicines A, B, C, D, E, F, G, H, I, and J. Steam distillation of an alcoholic extract of the air-dried root powder gave p-methoxysalicyaldehyde. The whole extract of leaves and roots possess powerful vescicant properties – an activity attributed to tylophorine and so used effectively in fighting asthma. Tylophorine has a paralyzing action on the heart muscle, but a stimulating action on the muscles of blood vessels. All the three principal alkaloids possess anticancer properties.
Long pepper, Pipal (Piper longum Linn.- Piperaceae)
P. longum  is a slender creeping undershrub with erect and subscandent branches, rooting at nodes. The fruits are small and fused into cylindrical spike like cones. The entire unripe dried spikes are used as spices and in medicine. They contain 12 amides such as piperine (3-4%), piperlonguminine (both major compounds), pipernonaline, piperlongumine etc, lactams like piperolactam B, aristolactam B and 4,5-dioxoaporphines (Cepharodines). The lignans present are sesuvin, pluviatilol and asrinin. The essential oil is rich in sesquiterpenes like β- caryophyllene and β-bisaboline. The fruits are more aromatic and sweeter than black pepper.
Long pepper is used against bronchial asthama, and is hepatoprotective, hypoglycemic and anti-inflammatory. It is  a rasayana (tonic) drug useful in improving memory power and intelligence. It is also immunomodulatory, chemoprotective  and antiulcer in nature. Long pepper is considered appetizer, aphrodisiac, expectorant and cures dyspepsia, piles, indigestion, anaemia, fever and intestinal worms.
Liquorice (Glycyrrhiza glabra Linn.- Fabaceae)
This glandular hairy herbaceous perennial, 1 m in height, bears pinnate leaves having 9-17 ovate leaflets, pale blue flowers in spikes and a 3-4 seeded red-brown glabrous pod. Liqorice, a native of southern Europe and western and central Asia, is cultivated on a mass scale in Spain, Turkey and U.S.S.R.

Liquiritigenin is proved to be antiasthmatic in action while glycyrrhetic acid offers protection against histamine induced bronchospasms. The glucocorticoid-like activities of the triterpenoid saponins are found to allay asthmatic conditions. The crude drug exhibits demulcent, expectorant, antimicrobial, antihepatotoxic and anti-inflammatory properties due to glycyrrhizin. It is also useful in treating peptic ulcer. Oral doses of liquorice are used for gastric, duodenal and oesophageal ulceration or inflammation, heartburn and mouth ulcers. It prevents infections of urinary tract and  used in Chinese medicine as an emmenagogue. Glycyrrhizin extract is used for chronic hepatitis. Glycyrrhetinic acid exhibits a specific antitumour activity and is a  cytostatic. It also induces phenotypic reversion i.e. the cancer cells get converted back more like normal cells

Danex is highly useful for